We are the Geneva Knights. Let’s be the Geneva Knights Errant. Last spring I listened to the Audible recording for 12 hours of The Legends of King Arthur and His Knights, by Sir James Knowles. It was fascinating to realize how each of the legends began with the expectation and excitement that the knights would commit themselves to seasons, and even years, of seeking adventure wherever it may be found in service to the king and codes of heraldic chivalry. More often than not, adventures found them.

Over the summer I listened to the 11 book series of Horatio Hornblower and the adventures he encountered during the great age of sail on the high seas throughout his career in the British navy. Only last week I finished for the second time the fantastic British recordings on Audible of all 7 of the Chronicles of Narnia. 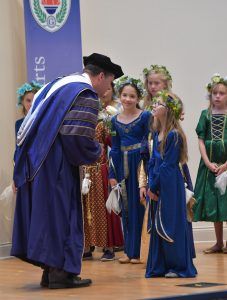 Each of these stories is rife with adventures; the word occurs more frequently than Aslan’s name in some of the books. The children are forever committing themselves to adventures for the sake of following Aslan and pursuing the good that he intends for them to do. Many involve harrowing escapes; faith is tested, virtues extolled, and yet they are willing to persevere unto the end.

There is a contagious spirit that prevails in King Arthur, Horatio Hornblower, and in Narnia. I love this genre and its adventuresome themes. This is what animates my moral imagination and supplies me with metaphors for understanding my calling in life.

I am hoping that each of us will regard ourselves as a Knights Errant, missionally committed to this adventure of Christian classical education. It requires an attitude, a decided level of energy, a sense of calling, a purpose to fulfill, and always has its sights set on attaining something good for the benefit of others.

Even after 25 very good years we have not even begun to know the length and breadth of the liberal arts landscape. There is more to this realm than we have experienced, and I am eager to explore it with you.

(This piece was part of a larger talk that Mr. Ingram gave to the whole school during faculty training.)