Symbols can take the form of words, sounds, gestures, or visual images and are used to convey ideas and beliefs. The Scriptures are replete with symbols, from a simple pile of rocks marking a place or event where God intervened for his people to a beautiful rainbow in the sky reminding all men throughout the ages of his promise of protection and salvation. We need symbols. We need visual reminders of where we have been, why we are pursuing a certain path, and how God has lead us along the way.

Throughout its history The Geneva School has established and embraced many symbols. In remembering how each one came about, we are encouraged and spurred on as we strive to be faithful in our calling of educating students in wisdom and virtue.

The name Geneva was chosen for our school because of the central role that Geneva, Switzerland, played in the Reformation and in advancing Christian classical education in Europe. Once the Reformation had taken root, thanks in no small part to the influence of its leading theologian, pastor, and statesman John Calvin, Geneva became a training ground for the spread of the Reformed faith throughout Europe and beyond. In 1559, the training of leaders from other countries was given institutional shape with the establishment of the Geneva academy, and through its work, the Reformed faith spread to Germany, Italy, the Netherlands, Bohemia, Poland, Hungary, England, Scotland, and the Americas.

Like Genevans of the 16th century, we strive today at The Geneva School to shape the minds and hearts of the next generation, trusting that through their lives and various callings our students will continue to advance the Kingdom of God on earth.

One of the ongoing discussions that occurred throughout the summer of 1992 centered around the look and content of our new school crest. Fundamentally, we wanted the crest to capture the essence of what we were striving to achieve through Geneva—to graduate virtuous scholars, not only academically sound but also wise, who, by the grace of God, would bring light to a dark world. That perhaps sounds far too idealistic to ever be achievable, but that was the goal, and the school crest we have today reflects those lofty aspirations.

At the center of the crest is a flaming basin, signifying the light of truth, and above it the Latin phrase Post Tenebras Lux. This phrase, translated as “Out of Darkness, Light” or “Light After Darkness,” was chosen in the sixteenth century as the motto of John Calvin’s adopted city of Geneva, Switzerland, and became the motto for the Protestant Reformation as a whole. Having chosen the name “Geneva” for our school because of the central role that Geneva, Switzerland, played in the Reformation, this motto seemed ideal for what we wanted to express through the school crest. The laurel leaves that frame the basin acknowledge not only the classical roots of our curriculum but also allude to Paul’s admonition in I Corinthians 10:24-25:

Do you not know that in a race all the runners run, but only one receives the prize? So run that you may obtain it. Every athlete exercises self-control in all things. They do it to receive a perishable wreath, but we an imperishable one. (ESV) 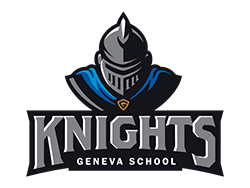 Medieval knights were men of great strength and skill, valor and virtue. To gain knighthood was a long and arduous task, involving years of training in weaponry, warfare, and wisdom. They were committed to a way of life—a life characterized by honor, devotion, generosity, and service—and they did not take such purposeful living lightly.

In keeping with the ideal vision of medieval knighthood, The Geneva School early-on chose as its mascot the Geneva Knights. Far more than simply an image of athletic prowess and triumph, the knight is incorporated throughout the life of the school. For example, upper school students, hand-picked for their virtuous characters, are paired each year with fourth graders studying the Middle Ages. They become mentors to these young pages, squires, and ladies-in-waiting. The months-long experience culminates in a day of medieval games, a feudal banquet, and the coveted Knighting Ceremony. Additionally, the halls and classrooms of The Geneva School are routinely visited by Norman the Knight, an eight-foot wooden replica of a Normandy knight in full battle regalia. Through such tangible images and experiences, students are reminded of their calling to be faithful, virtuous, and wise in all their endeavors—on the athletic field, in the classroom, and in all of life. 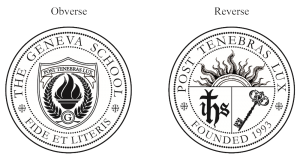 In honor of The Geneva School’s 20th anniversary, the Board of Governors commissioned in 2013 the striking of a commemorative silver medallion. Given to employees, board members, and special friends of the school, the coin features a number of symbols grounded in the history and mission of The Geneva School. On one side, the medallion features three images borrowed from the official seal and coin of the Canton of Geneva, Switzerland—the rising sun, the key, and IHS. The sun signifies the light of the Gospel dispelling the darkness of ignorance and unbelief. The key is emblematic of St. Peter, who holds the keys to the Kingdom of Heaven (Matt. 16:19), and serves to remind us of the authoritative role of the Church, faith, and wisdom in the life of the believer. And IHS is an ancient symbol for Christ and refers to the first three letters of Jesus’ name in Greek as well as to the initials of the Latin phrases Jesu hominum Salvator (“Jesus the Savior of man”) and in hoc signo (“in this sign you will conquer”).

On its obverse, the medallian features the name of the school, its crest, and the words Fide et Literis. This Latin phrase, meaning “By faith and by learning,” was the motto coined by John Colet, Dean of St. Paul’s Cathedral and founder of St. Paul’s School in London (1509), and serves as an enduring statement of the means by which true education is achieved and God’s Kingdom is established. Just as Colet hoped London’s St. Paul’s School, with its focus on faith and learning, would help to advance the Renaissance and Reformation movements, so too we trust that The Geneva School, with its commitment to Christian classical education, will play a vital role in spiritual and cultural reformation in our own day and for generations to come.